Don't teach homeowners to lock their doors. Teach burglars not to steal.

In the wake of the horrific Steubenville rape case, we've been hearing a lot lately about "rape culture". Is the United States, or western society in general, a rape culture? Is this a useful, verifiable or even meaningful statement? If it is in fact the case that an all-pervasive "rape culture" permeates every aspect of our society, are there any concrete steps we can take to alleviate the situation, or must we throw up our hands in despair and moan at each other, "all men are pigs"?

Let's get the obvious out of the way. Rape (and I'm thinking of sexual violence and coercion in general) is a horrible crime, and should be punished severely. The blame for rape lies 100% on the rapist. And given the seriousness of rape, false rape accusations - if and when they occur - should be treated correspondingly seriously.

It's clear that in some communities, something that could be called "rape culture" exists. The Steubenville football players were treated as gods who could do no wrong, and the level of callousness they showed about the rape is chilling - as are the lengths to which some adults in Steubenville went to pervert the course of justice.

If we recognize that rape culture exists at some times in some communities, then there are specific steps we can take to reduce it. We can educate people about the law, the seriousness of rape, the suffering of the victim, the medical repercussions and so on. But it seems to me the term "rape culture" often gets bandied about in much the same way as "the patriarchy" and "male privilege". It's hard to escape the suspicion that for some feminists, it's just another stick to beat all men over the head with, and criminalize them as a group.

I'm particularly tired of hearing the mantra, "Don't teach women to guard against rape, teach men not to rape", and seeing "helpful hints" like the following: 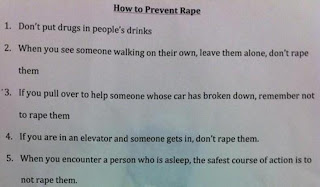 Wow, I'm glad someone reminded me not to rape! (Heavy sarcasm)

"Don't teach women to guard against rape, teach men not to rape" is no different from saying "Don't teach homeowners to lock their doors. Teach burglars not to steal." The fatuity of the latter advice is obvious. But there is a kind of moral panic that breaks out at the mention of rape, that prevents us from thinking clearly.

First of all, the vast majority of men don't need to be told not to rape; they weren't going to rape anyway.

Secondly, the message seems to be that women should not have to take any responsibility whatsoever for their personal safety. A woman should be able to walk the streets drunk at night in the skimpiest of clothing and not be accosted. Yes, in an ideal world she should, but let's face it - that's just not realistic.

The fundamental error made by those pushing the idea of "rape culture" (as a blanket, "Schrödinger's Rapist" type concept) is confusing two different things - risk and blame. Apparently, if we ask women to shoulder any of the responsibility to reduce their risk of being raped, we are totally absolving the rapist of all blame! It's either-or. To which I say: bullshit.

"Don't teach women to guard against rape" is not empowering - it's infantilizing! It's wrong-headed and dangerous advice. All potential rape victims - which means everyone - deserve better.
Posted by Schrödinger's Therapist at 8:20 PM