Acidgate is the latest shitstrom to stir up deep atheist rifts on the innertubes. On the face of it (no pun intended), it sounds horrifying - a man threatened to throw acid in Ophelia Benson's face. But let's dig a tiny bit deeper, shall we?

It started when Benson wrote a post about rivalry within the Bolshoi Ballet which had escalated to the point where someone threw acid in a rival's face - and then conflated the attack with people disagreeing with her on the internet. I'm posting a screencap because (a) I don't want to drive traffic to her blog (but here's a terrific response from Katie Graham) and (b) the Ophelia Benson Memory Hole is notorious. Notice how she is taunting the "mildew pitters" and practically begging them to respond intemperately: 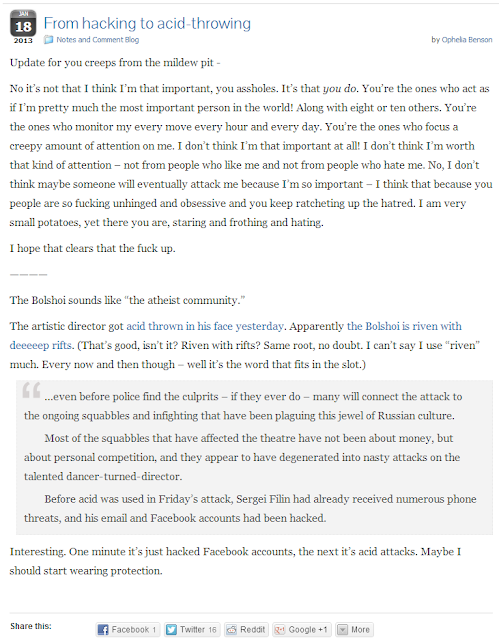 Unfortunately, someone took the bait: 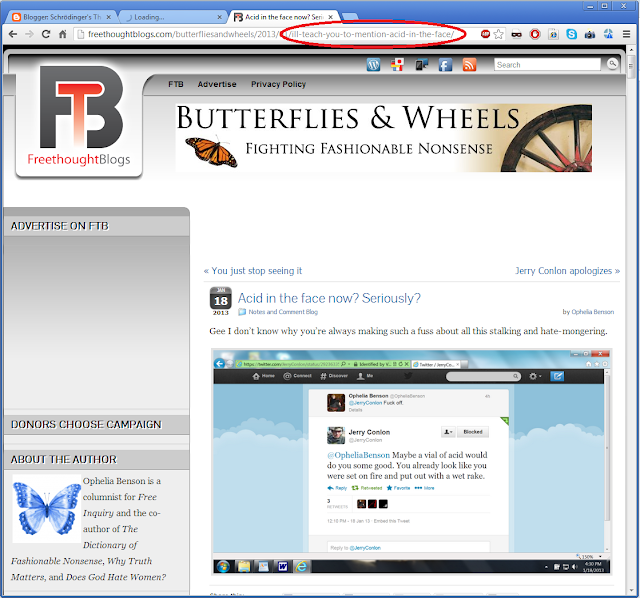 Notice something interesting? From the URL, the original title of the post must have been "I'll teach you to mention acid in the face." Now it's: "Acid in the face now? Seriously?" Benson obviously wants to conceal the fact that she mentioned acid first (apropos of nothing), because she prefers the narrative that some evil slymepitter threatened her out of the blue, with no provocation.

To his credit, the guy who sent the tweet realized it was a dumb move, and has apologized both personally to Benson and in the comments section of Pharyngula. He's a braver man then I - I can't even bear to lurk there and would rather go on The O'Reilly Factor. But - damage done, bait taken, and now the FTBullies are dancing with glee.

This is not the first time Benson has pulled this kind of stunt. She goads someone into cussing her out, he obliges, and she then wallows in professional victimhood once again, but not before deleting or editing her original post to make herself look as pure as the driven snow.

Once again I emphasize that it was a stupid move and condemn the tweet, but I have zero sympathy for Benson. Damion Reinhardt said it best:


For the record, it is unambiguously wrong to threaten someone with fire, acid, or porcupines.
— Damion Reinhardt (@D4M10N) January 19, 2013

UPDATE: Uberfeminist has a very detailed analysis of the various edits and changes Benson made to her initial shit-stirring post. My respect for Benson continues to plummet.


Posted by Schrödinger's Therapist at 2:39 PM