Many people are showing their support for the Tunisian activist Amina. That's great. But @furrygirl makes an interesting point, commenting on Muslim women who are speaking out against FEMEN:

You don't have to be pro-Islam to accept the fact that Muslim women are capable of making their own choices of what they wear and believe.
— furrygirl (@furrygirl) April 5, 2013

This is one of those cases where Twitter is a poor platform for discussion. Yes, women can make their own choices. But are they really totally free to choose, if they've been covered up and inculcated with self-loathing since childhood?

I have to tell you, I get creeped out when I see pictures like this: 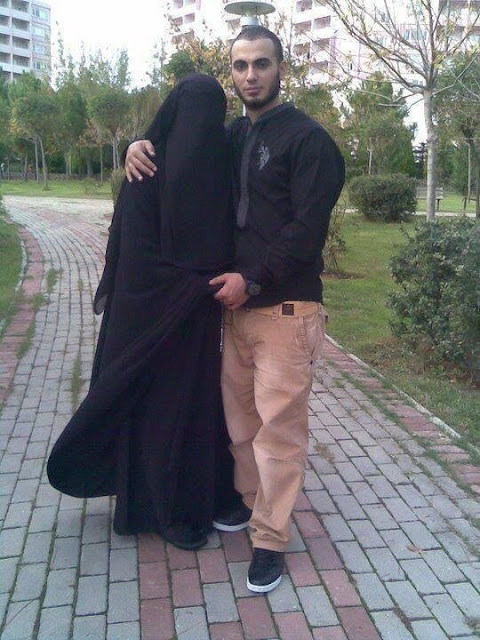 It's very hard for me to see the burqa as anything but a prison the woman is forced to carry around with her, which also destroys her identity and individuality. The guy could divorce and remarry, and he'd never have to change the photo!

Banning the burqa - as France did - is perhaps too extreme a response. But there are legitimate reasons to restrict it. I don't believe someone wearing a burqa should be allowed into a bank or courthouse, or any place where security or the need to verify people's identity is a concern.

Some years ago there was a case in Florida where a Saudi woman demanded the "right" to have her driver's license photo taken with her face completely veiled. Presumably the irony that if she returned to Saudi Arabia, she would not be allowed to drive, escaped her!

Some Muslim women insist that they cover themselves up of their own free will, and enjoying being "invisible" in public. Of course they are not invisible, not in the west anyway - they stand out like sore thumbs, and many others feel uncomfortable in their presence. And are they really exercising free will, or internalizing oppression?

I guess I have to come down on the side of treating all women as autonomous human beings, and letting them make their own decisions even if the decisions are ones I disagree with and I'm not totally sure those decisions are made freely. Anything else is patronizing.

But at the same time, there are situations as I've mentioned above where it's legitimate to impose restrictions. It's not a case of "Ban the Burqa" but rather, if you choose to obliterate your identity in public, that's your right, and here are the consequences of your choice that you'll have to live with.

To sum up, I believe that we should make every effort to ensure that women do in fact have a choice. We should be concerned about attitudes they may have learned at home that women are only worth half as much as men. We should try to counteract such attitudes in public schools, and we should take a hard look at Islamic schools that try to cocoon Muslim immigrants as much as possible to prevent them from being affected by secular and humanist attitudes in western countries.

Finally, we should recognize that it's not all-or-nothing. Some women will choose breasts, some the burqa, and most will fall in between. The goal should not be to force a particular outcome but to maximize every individual's choice and opportunity!

Posted by Schrödinger's Therapist at 10:27 AM