God commanded it, the Israelites did it, and that settles it.

There's still a great deal to talk about when it comes to morality, but the previous post was getting pretty long and I had to end it somewhere. But since I brought up William Lane Craig and the Divine Command theory of morality, I can't resist making the following point.

Craig, it will be remembered, raised eyebrows when he defended the slaughter of the Canaanites as recounted in the Book of Joshua. Craig had been importuning Richard Dawkins to debate him for some time, and Dawkins used Craig's defense as a convenient excuse to decline.

Now, I'm sure Craig is personally a reasonably moral guy, and doesn't approve of genocide as a general principle. However, he's hamstrung by his biblical literalism and his Divine Command Theory. If God commands genocide, then genocide must be A-OK.

At the same time, Craig realizes that the Book of Joshua, with its blood-soaked tale of the Israelites massacring their way across the Promised Land in search of lebensraum, is horrific to modern sensibilities. Its obvious evil has to be explained away. Craig twists himself into a pretzel trying to do so. 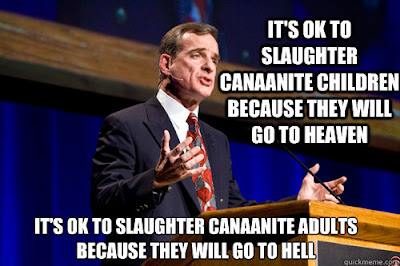 The irony is that by acknowledging that God's command to commit genocide has to be "spun" in order to be made palatable to the modern reader, Craig is undermining one of his own favorite arguments for God's existence, the one that goes: "Absolute morality cannot exist without God, absolute morality exists, therefore God exists."

If God were the one and only source of morality as Craig believes and argues, no spin would be necessary because no-one would feel any horror at the idea of Canaanites being wiped out. You could sum it up with a bumper sticker: "God commanded it, the Israelites did it, and that settles it."

By trying to spin the story, Craig is tacitly admitting that there is another source of morality - our own human judgment. We can recognize that genocide is evil, independently of what any ancient dusty scrolls have to say. If the bible god existed, the supremely moral act would be to say to him: "Fuck you, asshole, I don't care if you send me to hell, I still won't worship you." That's what I mean by Good despite God.

Anyway, Craig's argument backfires on him and strengthens my contention that we are inherent decision-makers on morality whether we recognize it our not. Continued human progress (and even survival) depends on realizing this fact, getting better at making decisions, and doing so on a basis of rationality and empathy for our fellow creatures.
Posted by Schrödinger's Therapist at 11:18 PM