[Edit: I've decided I'm not happy with the above title. I don't want to smear all atheists with the Atheism-crucifix lunacy. Also, not all feminists are mouth-foaming radfems. More thoughts on A+ as a religion in an upcoming post. Meta-edit: here it is.
Meta-meta-edit: Thunderf00t used this meme in his famous video! I thought it was really cool until I noticed a typo. Argh! Fixed.] 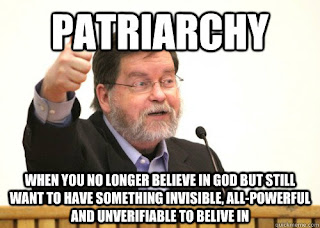 We atheists are supposed to be rational thinkers. We reject claims that are made without evidence. We don't believe in mystical, immaterial, ineffable entities that control our lives and makes us nothing but helpless victims. Right?
Posted by Schrödinger's Therapist at 12:58 PM