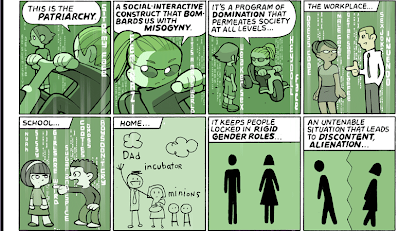 (Full cartoon here. This excerpt is used in accordance with the Fair Use provisions of the DMCA.)

Reviewing my ill-fated attempt to debate an Atheism-plusser, I saw a comment from a third commenter which I hadn't really paid attention to before. He points out the possibility that I and Pwrong (my anatagonist) were using different definitions of sexism, and thus talking past each other. I was using "sexism" in the everyday sense of "animus against women", while Pwrong was using it to denote men and women being treated, on average, differently by society.

This is a perceptive point. I've seen racism similarly redefined when racism in the everyday sense of animus against (e.g.) African-Americans can't be proven - just point to different outcomes, label it "institutional racism", and carry on as before. Similarly, if you can't prove that the dreaded wage gap is caused by hatred of women, just redefine sexism as "when bad things happen to female people" (while ignoring the possibility that many women would freely choose the trade-off of more time with their children in return for less status and seniority at work - they're just gender traitors anyway).

But the problem is, vicfems (victim feminists) want to have it both ways - they want to have their victim cake and eat it too. Having defined sexism as the effect, you can't also define it as the cause! Otherwise you whole world view obviously becomes circular, an impenetrable cocoon of dogma.

But that's precisely what vicfems do, and when you consider how often they throw words like "misogyny" and "oppression" around, it's very clear that they have the everyday definition of sexism - hatred of women - in their minds even as they redefine sexism as any inequality in outcomes.

Let me state very clearly that I strongly believe in equal rights, respect and responsibilities for all people, regardless of gender or skin color. Compared to other species, there is so little genetic diversity in humans that racism makes no sense whatsoever - it only reveals its exponent as ignorant. The issue is not as clear cut with gender - there is growing evidence of differences between male and female brains, and it's uncontroversial to all but the most rigid dogmatist that women, on average, are more likely to find greater fulfillment in raising a family while men are more likely (and under more pressure) to be the hunter who brings home the bacon at all costs. But no individual should ever be denied opportunities on the basis of these averages.

Try telling this to a plusser, though. It's a sacred, unquestionable core dogma of extreme feminism that men and women are identical, and gender is nothing but an arbitrary social construct invented by the dreaded Patriarchy to oppress women and steal 23% of every woman's paycheck (and at the same time throw money away by forcing women out of the workplace so that they can hire more men for more pay).

There really is no point trying to have a rational argument with anyone who is so deeply stuck in a blinkered dogma that ignores reality, evidence, logic and the most rudimentary knowledge of economics.

"Atheism plus we use critical thinking and skepticism" - MY ASS!
Posted by Schrödinger's Therapist at 5:21 PM