Becoming what you hate

Have you heard the Cherokee legend of the wolves? Inside each of us there is a battle going on between two wolves. One wolf represents kindness, compassion and empathy. The other represents hatred, resentment, and anger. Which of your two wolves wins? The one you feed.

I've been thinking a lot lately about why the Great Atheist Schism is such a fascinating topic for so many of us. On the one hand, it's sad that at a time when women's rights are being rolled back wholesale in state legislatures across the US and the Republican party is ever more blatant in pushing its Christian Dominionist theocratic agenda, so much of our precious time and energy are being used up by internal divisions. On the other hand, there's something morbidly engrossing about the spectacle, like watching a slow-motion train wreck.

I'd like to say that my motives are pure - that I stay in the fight because I deeply care about skepticism, rationalism and free thought. I care about opposing dogma and authoritarianism, whether of the traditional religious or radfem kind. I care about equal rights, respect and responsibilities for all humans. I care about free speech, fairness and due process, and despise censorship, moral panic and witch-hunting.

However, I also have a little more self-awareness than any of the plussers (or indeed all of them put together) have shown so far. I'm a human being, and if you attack me or those dear to me, I will be hurt and angry. I will be strongly attempted to reply in kind. I have to keep reminding myself not to become what I hate, not to sink to their level.

I know some people on both sides have played hardball and done things that were not their finest moments. Personal attacks, cyberstalking and doc-dropping are never acceptable, whether aimed at men or women, radfems or anyone else.

A wise friend of mine once said, there are some arguments you lose just by taking part in. When you see Pope Peezus of Plus declaring infallibly that all opponents of his berserk man-hating clique are stupid assholes at best and mass murderers at worst, you realize that there is simply no point in trying to engage in any kind of reason- or fact-based debate with him and his flying monkeys. This asshole is just not interested in defending any kind of defensible or even coherent position. It's all about the hatred.

Myers is consumed with hatred for anyone who isn't 100% in lockstep with his rigid radfem ideology. He basks in it, soaks it up, and projects it onto anyone who has the temerity to dissent from his dogma. And the more people who disagree with him, the more sure he is of his absolute infallability. "See! Michael Shermer said something off the cuff that can be twisted by the most uncharitable possible interpretation into an insult to women! It just proves what I've always said, everyone in the world is a mass-murdering rapist except me and my merry little band!"

Which led me to a sudden realization: 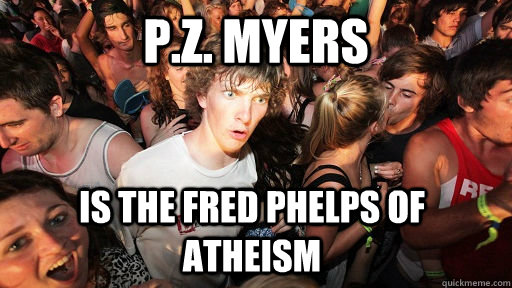 (Caption: P.Z. Myers is the Fred Phelps of atheism)

So how do we fight Fred Phelps and his brood of inbred haters? Not by sinking to their level. Not by feeding the same wolf they're feeding. Not even by opposing them by legitimate means, such as lawsuits and counter-protests. Not only do they have a big advantage in being able to claim religious freedom (a great example of unchecked privilege), but the opposition just reinforces their self-image as a persecuted righteous minority, the victims of a sinful world.

Experience has shown that the best way to deal with the Phelpsoids is to refuse to play their game. Call in some mean-looking biker gangs or tough-ass veterans to keep them out of your face. Then get on with your life. Pay no attention to the trolls, except to mock them. DO NOT TAKE THEM SERIOUSLY - they don't deserve it.

If christians use A-plus as a stick to beat all atheists over the head with, as they have already started to do, we should give an embarrassed grin and say, "Well, you've got your Fred Phelps and we've got PZ Myers and his Goddess-hates-men clique - but they don't represent us." But we should not try to engage directly with the plussers, except to have a good laugh at them.

Now, there are some people who have been attacked by A+ who nevertheless want to keep the lines of communication open, who want to empathize with their enemies and understand what's going on in their heads. The amazing Maria Maltseva is a prime example of this. But much as I admire and respect Maria, I fear I don't have her reserves of compassion, and her path may not work for me.

So that is my resolution for 2013 - treat Atheism÷ the same way as the WBC. Imagine the endless drama is something you're watching on TV, and enjoy it in a hip, cool, ironic way. Of course if they're doing serious harm to someone, that's something to take seriously, but so far they've proven incompetent at that.

But - I want to change my perspective and put as much emotional distance between myself and Atheism♀ as possible. I don't want them draining my emotional energy. Above all, I don't want to run the risk of becoming what I hate.
Posted by Schrödinger's Therapist at 4:42 PM