A couple of observations...

I know I've been remiss in maintaining this blog in the last couple of months, so let me close out the year with a couple of observations.

First of all, it seems to me that feminism (of the more radical, academic kind) is very much a first world problem. You don't hear much squawking about rape culture, male privilege and "Teh Patriarchy" in poverty-stricken third world countries, or for that matter in the hood or the barrio. That's because everyone has it tough there, and women don't have the luxury of sitting around moaning that they have it much worse than men. There's a sort of Maslow Hierarchy of Needs going on: 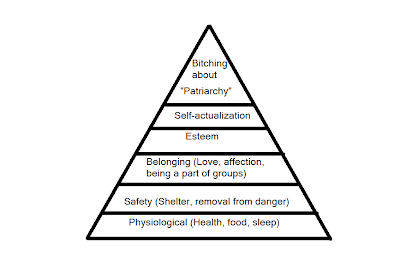 This is not to say that all women's grievances are invalid. But the gap between men and women was never as wide as, say, the gap between black and white people in the days of slavery. Did black men and white men sip mint juleps together on the veranda while black women and white women toiled in the fields? No, of course not! Which makes the core dogma of radical feminism - the claim that male oppression of women is a "transhistorical phenomenon prior to or deeper than other sources of oppression, not only the oldest and most universal form of domination but the primary form and the model for all others" - look staggeringly self-obsessed and narcissistic.

And while economic inequality persists today, women typically have the same socioeconomic status as their husbands, partners, fathers, and other male cohorts. A cursory glance at the ubiquitous lists of alleged "male privilege" that you see everywhere on the internet shows that what is called male privilege is often actually wealth privilege which hurts men as often as women.

Whoever compiles these lists must have zero grasp of economic or legal realities. There is always much moaning and gnashing of teeth along the lines that every workplace is dominated by overpaid guys who were hired just because they possess a penis. And of course every boss is not only male but a lecher who molests female employees at will, with no consequences. Not to mention the absolute, unbearable horror that your coworkers will think that you, a mere female, got hired only because of your vagina! Dear FSM, what planet do those people live on?

Which brings me to my second point. Even as things get relatively cushier for women in the workplace, as it gets harder to fire them and the legal system gets increasingly skewed in their favor, far from admitting the gains they have made, radical feminists keep increasing their demands and ramping up the rhetoric about male domination and oppression. It's the shit test on a massive scale!

Why the disconnect? Why are some feminists so obsessed with their own grievances and so clueless about, and apathetic towards, the often more serious social injustices that are staring them in the face?

I believe the problem is that we have (at least) a whole generation of feminists whose views are informed, not by any real life experience, but by the hatred indoctrination they received at "womyn's studies" courses in college. The radical, extreme ideology that feminism has mutated into in recent years is too out of touch with reality to survive in the real world, but in the sheltered cocoon of academia, it grows ever more virulent in its misandry - and unfortunately exerts a disproportionate influence on government policy, ensuring its own survival, and creating a growing cadre of dogma-spouting ball-busters.

How can we break the vicious circle? How can we repair the damage to male-female relations that decades of academic feminism has wrought? I wish I knew!

I think our only hope is a broad and genuine equal-rights movement that acknowledges both the injustices towards women in the past and their continuing effects today, and the serious problems many men face in modern society in cases where the pendulum has swung too far in the opposite direction. I'm a bit put off by the "other side of the coin" misogyny shown by some big names in the current MRM, but at the same time I see signs that the femocracy is starting to run scared.

Witness the constant harping by radical feminists that men's rights supporters are a hate group. For proof, they point to the SPLC officially declaring MRM a hate group along with the KKK and the John Birch Society. And why did the SPLC make this determination? Because radical feminists pressured them into it! The same people who now turn around and screech that men's right supporters are officially-designated terrorists and should be denied their right to free speech.

It reminds me of the words of Mahatma Gandhi: "First they ignore you, then they laugh at you, then they fight you, then you win." I think right now we are in the transition between laughing and fighting. There is a long slog ahead, but I try to remain upbeat, knowing that there are still plenty of women with a sense of goodwill and fairness, and more women are waking up every day, smelling the coffee (so to speak), and realizing that radfem is insulting and infantilizing to women, consigning them to a state of permanent helpless victimhood.

And on that note I leave you for now. Have a great holiday and an equally great New Year!
Posted by Schrödinger's Therapist at 9:57 PM